May has started the month with good news for estate agents. Comunidad Valenciana continues consolidating itself as one of the regions of Spain with the most property transactions, according to data from the College of Property Registrars.

A few weeks ago, Mediaelx informed its customers about the first sales data of homes for foreigners in 2018. After four months, new records keep coming and confirm what we were saying before: the exponential growth of home sales to outsiders.

This last year, a total of 65,400 home sales have been registered, of which 26% refer to Comunidad Valenciana. It is a figure that quadruples that of 2009: 16,500 transactions. What does this mean? That people from Europe continue to trust the real estate market of the Costa Blanca to buy a home.

Who said concern for Brexit?

Since the information appeared on the possible exit of the United Kingdom in Europe, many real estate agencies have shown their concern about this fact. However, the latest sales figures for properties, once again highlight the British as the nationality with the highest percentage of sales in Spain.

The British have acquired a total of 10,200 homes, representing 15.54% of total sales in Spain. The Costa Blanca is synonymous with good weather and exotic beaches. Sun tourism continues to prevail over everything.

The British nationality is followed by the German with 7.5% of sales, French (7.4%), Belgian (6.2%), Swedish (5.8%) and Romanian (5.4%). What is the reason for this increase? The registrars argue it this way: "Since the bursting of the housing bubble, the nationalities of head are characterized by having a high level of income per capita, which buy housing in Spain primarily for tourism reasons, which decisively conditions the location of demand foreign. "

The purchase of second-hand homes continues to grow, above that of new build. In this last year 2018, the second house has represented 83.7% and the new build house 16.3%.

It should be noted that the British and Germans prefer the resale model and the Belgians, Norwegians, Swedes and Dutch the new build.

Ready to offer your properties to foreigners? Mediaelx has the solution: a personalized real estate website

If you want to have a tailor-made real estate website to draw attention to your customers and above all, to take advantage of this growth in selling homes to foreigners, contact Mediaelx. 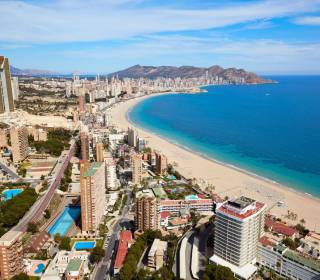