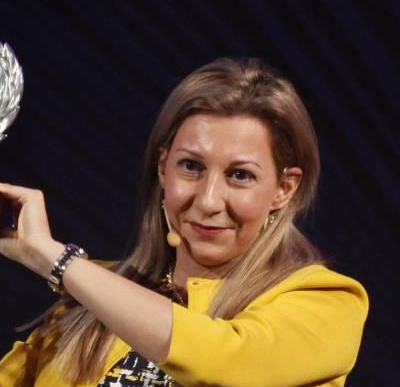 For Mediaelx it is a great satisfaction to congratulate our new winner of the prestigious PRIZE PLANET 2020: Eva García Sáenz de Urturi for her work "Aquitania", historical novel about Leonor of Aquitaine, which describes the France of the 12th century.

In addition to being proud to maintain a relationship of friendship with her family, we have also collaborated on some occasions at work, as, before joining Planeta, Eva trusted Mediaelx to design her professional web page in the year 2015. We created a very attractive and totally personalised website for her, in which the interesting entries to her blog, which had a large number of visitors, stood out.

Although our illustrious client was born in Vitoria, Eva García has lived in Alicante since she was fifteen, where she studied at university. She has a long and fruitful professional career, in which she has won important prizes and recognition. She became popular with her famous trilogy "El silencio de la ciudad blanca", of which a film adaptation has been made. His works have been translated into numerous languages and are among the best-selling in Europe, Latin America, the United States ...

Among his most important publications we highlight:

From Mediaelx we want to emphasize our support to this great novelist and person, as well as to express publicly our most sincere congratulations and to thank him for the confidence that he has always shown us.